A Short History of Asphalt 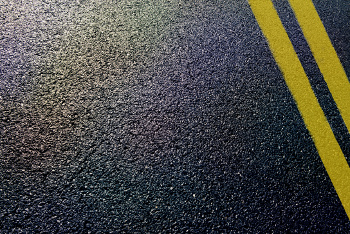 Asphalt covers more than 94 percent of all paved roads in the U.S., and as a result we don’t spend too much time thinking about it (unless we are unfortunate enough to drive over a pothole). However, the history of asphalt and how it became the paving material of choice in this country is actually rather interesting.

The history of asphalt as a road-paving material actually begins with the Babylonians, who used naturally occurring deposits of asphalt to build roads as early as 615 B.C. However, it wasn’t until the mid-1800s that asphalt-like mixtures were used to pave roads in Europe and America. The first true asphalt pavement in the U.S. was laid in front of the Newark, N.J. City Hall in 1870, and not too long afterwards Pennsylvania Avenue in Washington D.C. was also paved using asphalt.

Before 1900, use of natural asphalt was the norm, but by 1907 it had been outstripped by the production of refined asphalt. Early methods of refining asphalt were quite crude by modern standards, but throughout the 1920s and 1930s, many advances were made. By 1930 asphalt production was finally able to keep up with the growing demand, and it was soon being used in the construction of 80% of state highways.

During World War II, the need for more durable surfaces for use by military aircraft led to rapid advances in asphalt technology. These advances were quickly followed by advances in paving equipment used by contractors, which helped sustain a major road-building boom in the 1950s and 60s. In 1955, the National Asphalt Pavement Association was formed with the goal of improving the design and construction of asphalt roadways.

During the energy crisis of the 1970s, the asphalt industry realized the importance of conserving natural resources through recycling. As a result, since that time the amount of recycled asphalt mixed in both base and surface courses has steadily increased. Today, more than 95 million metric tons of asphalt is recycled each year, making it the most recycled material in America.

In recent years, asphalt has been used in many other applications besides road paving, including runway paving and as a lining for landfills. It’s even approved by the EPA to be used as a lining for drinking water reservoirs and fish hatcheries.

The next time you get in your car and pull out of the garage onto your asphalt driveway, drive down an asphalt road to your local mall, and park in the asphalt parking lot, spend a few moments thinking about the decades of innovation that made that trip possible.